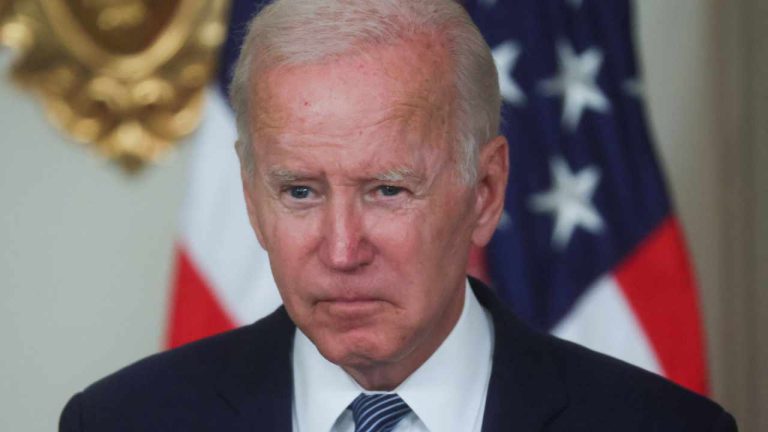 U.S. President Joe Biden has shared his perspective on inflation. “I am more optimistic than I’ve been in a long time,” he said, noting that inflation has not spiked for several months. Many people disagree with Biden, with one saying that “families are poorer than when he took office.”

US President Joe Biden’s Views on Inflation and the U.S. Economy

U.S. President Joe Biden discussed a wide range of topics, including the U.S. economy and inflation, in an interview with 60 Minutes, aired Sunday. He was asked what he can do better and faster given that the annual inflation rate of 8.3%. Biden replied:

First of all, let’s put this in perspective. Inflation rate, month-to-month, was up just an inch, hardly at all.

Noting that he’s not arguing that 8.3% inflation is good news, Biden stressed: “It was 8.2% before.”

While acknowledging that the inflation rate is the highest in 40 years, the president said: “Guess what we are, we are in a position where for the last several months it hasn’t spiked … It’s been basically even. And in the meantime, we created all these jobs.” While admitting that the prices have gone up, Biden argued that “They have come down for energy.”

When asked whether the U.S. economy is going to get worse, President Biden said: “No, I don’t think so. We hope we can have what they say: a soft landing.” Regarding whether inflation is going to continue to decline, the president remarked:

I am telling the American people that we are going to get control of inflation … I am more optimistic than I’ve been in a long time.

Many people took to Twitter to slam President Biden for downplaying the problem and not understanding the challenges faced by the American people. Responding to him insisting that inflation has not spiked, a number of people reminded the president that the inflation rate was 1.4% when he took office.

Economist and research fellow at Heritage Foundation Joel Griffith tweeted a list of items where prices have gone up significantly, including gas, food, and furniture. 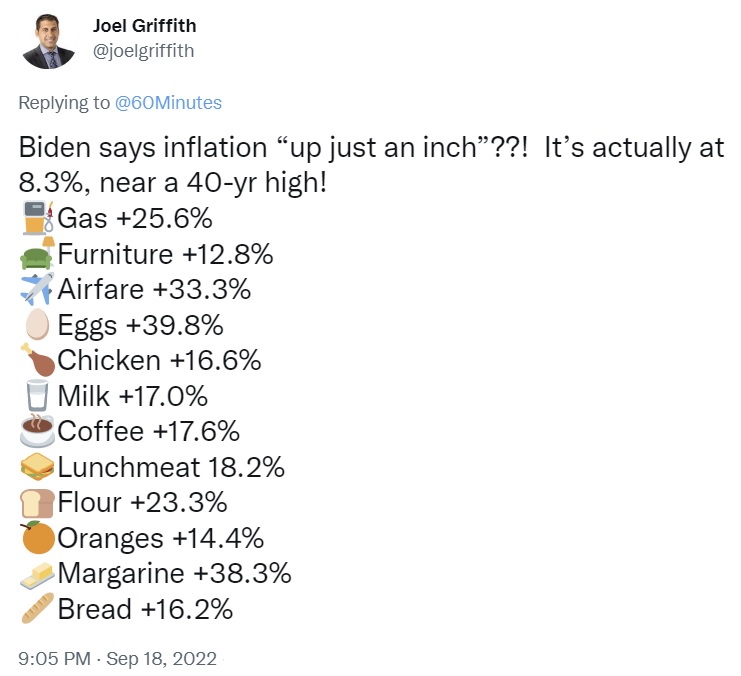 Politicians also chimed into the conversation. Jennifer-Ruth Green, a candidate for Indiana’s Congress, tweeted: “Inflation was 1.4% when Joe Biden took office and it is 8.3% nineteen months later. Americans are badly hurting and instead of taking responsibility for his mistakes, the president just wants the issue to go away so he can keep his party in power after the midterms.”

Ronna McDaniel, chairperson of the Republican National Committee, opined: “Yesterday, Biden said Americans need to put inflation in ‘perspective.’ That perspective: Real wages have fallen since Democrats passed their $1.9 trillion ‘stimulus,’ and families are poorer than when he took office.”

Jim Bognet, a candidate for Congress in Pennsylvania, wrote: “Joe Biden, Nancy Pelosi, and Matt Cartwright think 8.3% inflation is acceptable. It’s not. Americans are being crushed. The highest inflation rate in 40 years has deprived you of a month of your annual income. We need change now.” Former Secretary of State Mike Pompeo opined: “President Biden may not think that inflation is a big deal. But every American who shops for groceries knows the devastating impact of Biden’s policies.”

Jay Clayton, former chairman of the U.S. Securities and Exchange Commission (SEC), commented on CNBC that while Biden is right to focus on inflation, “People don’t pay inflation, they pay prices.” He described:

People are focused on prices … Average household spending is going up $500 a month. That hurts.

What do you think about President Joe Biden’s comments on inflation? Let us know in the comments section below.