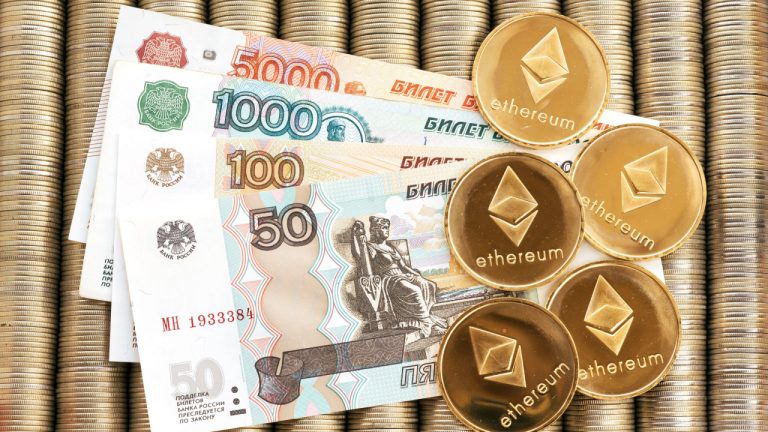 Developers are working on a “cryptoruble” that, as they say, can improve Russians’ access to global exchanges and be used for cross-border payments. Defi platform Indefibank, which is behind the project, says the token will be pegged to the national fiat but independent from a state-issued digital ruble.

Cryptoruble to Give Russian Companies Another Option for International Settlements

Work is underway in Russia to launch a “tokenized cryptoruble” on the Ethereum blockchain, the CEO of decentralized finance (defi) banking platform Indefibank, Sergey Mendeleev, announced during the Blockchain Life 2022 conference.

The plan is to issue the token through a decentralized smart contract with excess collateral, or based on the model employed by the DAI stablecoin, the executive explained. Its exchange rate with the Russian ruble will be 1:1. Quoted by the crypto news outlet Forklog, Mendeleev detailed:

A user can either independently issue a cryptoruble by placing sufficient collateral in the form of stablecoins or cryptocurrency on the balance of a smart contract, or purchase it from an authorized exchanger for fiat.

The total supply will directly depend on the amount in collateral. Indefibank estimates the size of the potential market among private individuals at between 5 and 10 billion rubles (approximately $82 – $160 million).

The cryptoruble developers expect other members of the crypto community to join the initiative and see the project becoming an independent decentralized autonomous organization (DAO) in the future. The cryptoruble will be a payment tool unrelated to the central bank digital currency (CBDC) created by the Bank of Russia.

Russia’s central bank, which recently agreed that the country would need cryptocurrencies to circumvent sanctions, vowed to promote its digital ruble in foreign trade. The regulator also made it clear discussions are not about allowing domestic crypto payments and expressed doubts about the need to legalize private digital currencies.

Indefibank’s CEO noted that Russian law does not require the establishment of a DAO and the issuance of ERC20 tokens to be coordinated with the central bank. However, if the monetary authority objects to the use of the word “ruble,” the company is ready to change the name of the crypto.

The cryptoruble will make it easier for Russians to access global exchanges and settle with foreign partners, Mendeleev insisted. The token’s developers have already prepared an MVP, the report reveals, with the presentation of the final product expected in October.

Do you think the Bank of Russia will allow currencies like the cryptoruble to be used in foreign trade deals? Tell us in the comments section below.