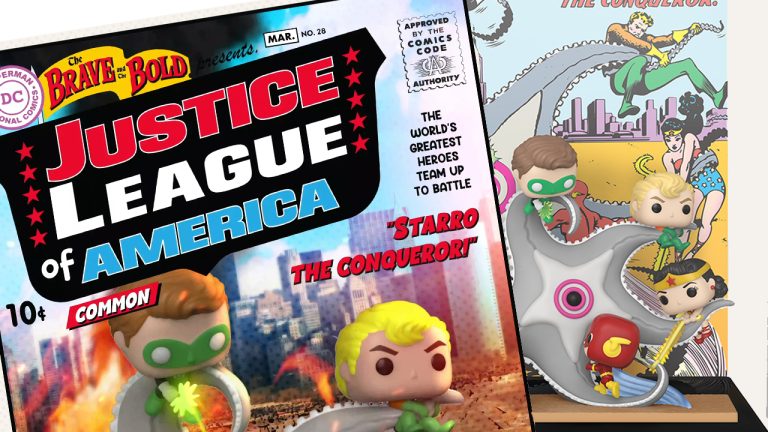 Funko has teamed up with the multinational retail corporation Walmart and the American film and entertainment studio Warner Bros. to bring digital collectibles to the retail space, the pop culture collectibles firm announced on Wednesday. According to Funko, the digital collectible offering is consumer friendly as fans can purchase the non-fungible token (NFT) and physical collectible simultaneously.

The company that’s well known for creating unique bobbleheads and vinyl figurines, Funko (Nasdaq: FNKO), has announced a partnership with the entertainment firm Warner Bros. and the retail giant Walmart. Funko says the company is bringing NFTs to the retail space with a Digital Pop series that features DC’s “The Brave and the Bold” #28 (1959) Comic Cover Pop. The collectible features the Justice League teaming up against Starro and it will be made available exclusively on Walmart.com on October 7.

The new Funko Digital Pop will debut during Walmart Collector Con and the company says 30,000 units will be made available. That includes the NFT and “its physical twin counterpart,” Funko explained on Wednesday. Funko has been into the non-fungible token (NFT) space for quite some time and recently partnered with the entertainment firm Paramount to drop “Avatar Legends” NFTs.

The company has positioned itself with a number of well known brands and the company’s Digital Pop series has highlighted cult classics like Jay and Silent Bob, and characters from DC Comics. Andrew Perlmutter, the chief executive officer at Funko detailed the pop culture collectibles firm is excited to bring the latest Digital Pop NFTs to the retail space. We are thrilled to bring this first-to-market opportunity to the world’s largest mass retailer,” Perlmutter said. The Funko CEO added:

This is an opportunity to create an easy entryway for shoppers to own digital collectibles featuring fan-favorite brands and characters.

Funko is not the first to introduce NFTs to the retail space and not the first to bring them to Walmart either. At the end of February 2021, the trading card, candy, and collectibles company Topps introduced the “2021 Garbage Pail Kids Food Fight” series which included physical cards and Garbage Pail Kids (GPK) NFTs. The GPK NFTs could be found in packs of GPK cards that were sold at Walmart and Target retail stores at the time.

“To bring this new collection of digital collectibles to retail will allow for an even broader reach and invite fans – both avid collectors and those that are entering the space for the first time, the opportunity to engage, physically and digitally, with beloved franchises, like DC,” Hackbarth said in a statement. “The Brave and the Bold” series first published by DC Comics in the 1950s features team-ups of well known DC characters from the comic book’s universe.

What do you think about Funko partnering with Warner Bros. and Walmart to drop a new Digital Pop NFT series? Let us know what you think about this subject in the comments section below.