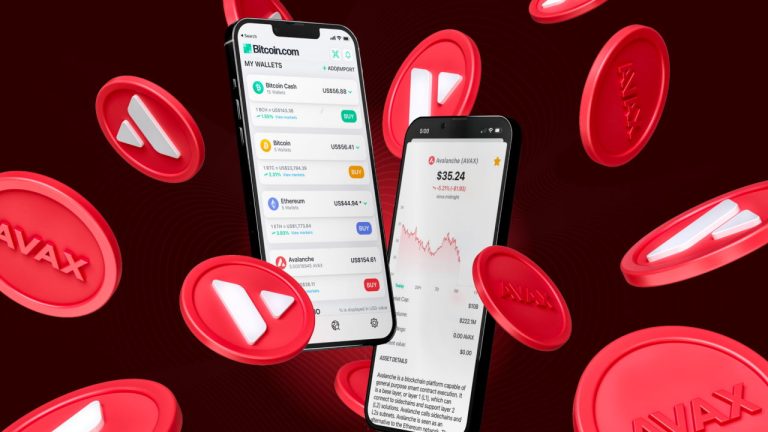 Bitcoin.com has added support for the smart contract platform Avalanche to its self-custodial web3 wallet. The addition of Avalanche to the multichain Bitcoin.com Wallet means the wallet’s millions of users are now able to buy, sell, send, receive, and manage $AVAX. Users will also be able to trade tokens on the Avalanche network, as well as interact directly with the hundreds of Decentralized Apps (DApps) hosted on the high-throughput Ethereum Virtual Machine (EVM)-compatible network, enabling use cases like borrowing and lending, prediction markets, and synthetic assets.

“The potential of decentralized finance to create economic freedom is vast, but to realize that potential, we need to democratize access. And for that, it’s essential that we provide a low-fee environment,” said Bitcoin.com CEO Dennis Jarvis. “The Avalanche network is fast and cheap while also offering a high level of decentralization, which is critical for security and censorship resistance. Importantly, Avalanche has also attracted a huge range of high-quality DApps, which increases its utility for our millions of users.”

Bitcoin.com’s support for Avalanche is also motivated by the development of its ecosystem token $VERSE, which will require a low-fee smart contract platform to enable the small, frequent transactions associated with the token’s utility and rewards functions. Verse will launch on Ethereum but also be bridged to Avalanche.

Strategic investors purchased $33.6 million in a private sale of $VERSE tokens in May. Registrations for the public sale are now underway at getverse.com.

Avalanche is the fastest smart contracts platform in the blockchain industry, as measured by time-to-finality, and has the most validators securing its activity of any proof-of-stake protocol. Avalanche is blazingly fast, low cost, and green. Any smart contract-enabled application can outperform its competition by deploying on Avalanche. Don’t believe it? Try Avalanche today.