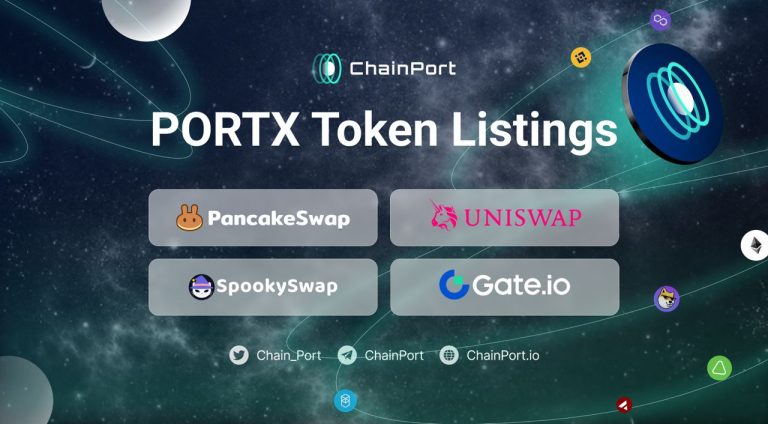 PRESS RELEASE. The team at ChainPort is incredibly excited to update the public about PORTX’s Token Generation Event (TGE). The team has worked tirelessly to develop the most exemplary ecosystem token for the next-generation cross-chain bridge.

Since its launch last year, ChainPort has created a new standard as a cross-chain bridge. ChainPort includes impressive security features, full interoperability, and fast bridging of tokens. Currently, ChainPort supports over nine chains, has a port volume of $615,923,820, and has a total value of $71M.

Progress advances at an accelerated pace. For example, ChainPort has established a fee mechanism and bridge support for more chains, and the PORTX token is now an integral part of the ecosystem.

Even though PORTX’s TGE was supposed to take place earlier, different factors delayed the launch, including market conditions, rigorous testing of ChainPort’s security, and testing the new fee model.

With ChainPort’s fee model in place, ChainPort will accumulate all revenues until the TGE. Following PORTX’s TGE, up to 95% of all revenues will be swapped to PORTX tokens and redistributed per PORTX’s tokenomics. With the market stabilizing and the fee mechanism tested, ChainPort is ready to launch PORTX. The TGE for PORTX is taking place today, on the 20th of September, 2022.

The ChainPort team will launch the PORTX token on a centralized exchange and right after on several DEXs on different chains. ChainPort has partnered with top market makers and multiple DEXs.

PORTX holders can easily port their tokens to the four chains currently using ChainPort’s bridge. These chains include Ethereum, Polygon, BNB Chain/BSC, and Fantom. Porting is permissionless and will allow users to trade their tokens on Specific DEXs.

ChainPort may announce additional DEXs and exchanges at a later date.

Security is always paramount for ChainPort, and 95% of the funds are stored in cold storage wallets provided by leading industry security experts: FireBlocks MPC and Gnosis-safe multi-sig.

ChainPort is a permissionless bridge already porting more than 190 tokens between blockchains, with additional projects joining daily. Porting is done in minutes through a friendly and straightforward UI without requiring technical integration.

Join the ChainPort community for updates:

This is a press release. Readers should do their own due diligence before taking any actions related to the promoted company or any of its affiliates or services. Bitcoin.com is not responsible, directly or indirectly, for any damage or loss caused or alleged to be caused by or in connection with the use of or reliance on any content, goods or services mentioned in the press release.