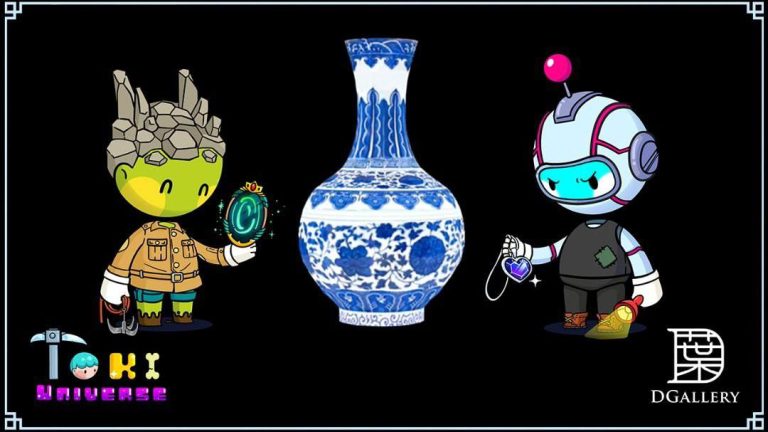 Toki Universe, consists of Antiques NFT, PFP, and own Miniverse already in place. A brand-new project on the Ethereum blockchain created with the goal of bringing a breath of fresh air to the NFT space. The fractionalized NFT PFP project is delivering an unprecedented antique-themed NFT collection with an out-of-this-world storyline, inspired by the courageous journey of the ever adventurous and resourceful Toki characters to Planet Earth.

All holders of Toki Universe will be able to receive, and mint fractionalized antique NFTs issued by DGallery. The fractionalized antique NFT is based on the actual products that the gallery has in store. Most items are purchased from auction houses such as Sotheby’s, Christie, and other private channels. DGallery is established with the sole purpose of putting the spotlight on the rich Chinese cultural and traditional craftsmanship. It brings together thousands of years’ worth of authentic Chinese arts, crafts and heritage, and is committed to preserving them to the fullest extent. On top of that, the gallery has been actively collecting artworks and antiques with high values in China that can be traced back as far as the Ming and Qing dynasties. Today, it has evolved to become a modern antique collection house to serve a wider crowd of zealous and modern art collectors, with more than 1,000 pieces in its inventory to choose from.

Backed by a team of seasoned NFT investors, the pioneers of Toki Universe have witnessed firsthand the successes and pitfalls of other recent projects. They observed that NFT is gradually becoming more common in the mainstream and wanted to create something truly impactful which makes them stand out. In addition, the team understands the importance of delivering transparency and consistency while building a loyal and devoted community in the NFT space. Therefore, a model is employed where unremitting value is channeled back to the community through high-quality artwork and purposeful utility. After successfully assembling a team of experts in their respective fields, the mission to bring Toki Universe to Planet Earth has commenced.

According to Mr. Louivee Lim, the project advisor of Toki Universe: “We want to merge our expertise in both the traditional and virtual world to bring about a fascinating and extraordinary collection that the NFT space has never seen before. While we wow the new world, we also work hard to preserve the old world, which includes beautiful ancient relics.”

Other significant Toki Universe utilities include revenue stream from antique sales, exclusive invitation to play games on metaverse, as well as the opportunity to participate in the Toki Achievement Bar or TAB. Our dedicated roadmap has laid out the timeline for the development of TAB and other benefits of the Toki Universe. This includes the access to merchandise such as T-shirts, hoodies and caps. Holders who have reached a certain level will further unlock invites to the latest and most happening parties and events where they can meet other holders in real life.

There are plans to develop Toki Universe in The Sandbox in the future and Decentraland are in talks and will soon be added to the roadmap. The highly anticipated collaboration with Otherside through the purchase of metaverse lands, as well as joining forces with the Bored Ape Yacht Club have also been added to the pipeline.

The long-term ambition for Toki Universe is to foster a sustainable and community-led environment. 10,000 in total supply of Toki NFTs will soon be launched through the new and exciting Toki Auction medium  to  effectively set the trend and lead the way in the NFT world. Inspired by Doodles, this type of auction allows bidders to bid as much ETH in their initial bids as they wish, while having the option to increase their bids. At the same time, the supply of NFT for sale and auction schedule have been determined and fixed. During the end of the Toki Auction, the clearing price is identified and all bids above the clearing price will successfully receive the NFTs as well as a refund if there is any remainder after taking into consideration the individual user bid and clearing price. For any unsuccessful bids, a full refund will be issued accordingly.

During the actual sale of the antique, a portion of the profits will be channeled back to the community wallet to generate more value for the highly valued and loyal holders. Additionally, holders will also receive access to the dedicated Toki Marketplace.

As the official launch day for Toki Universe is fast approaching, the team is working tirelessly to ensure that things are on track to meet the expectations of future holders while setting the stage for the emerging NFT world.

This trailblazing Toki Universe NFT PFP collection will officially hit the market during a grand launch on September 9, 2022. Toki Universe welcomes every WEB3.0 enthusiast to join their community and be part of their metaverse journey.

“Our design comes with PFP, card game design, and future metaverse game attributes. The first that we know in NFT space. It took us more than 8 months to build this project and we are still at the beginning.” by QX Creative Director of Toki Universe.